David Bowie album reviews - Reviewsonebowie. His output has been consistently brilliant over a long period of time with only a few missteps along the way. There's the 60s Ken Pitt inspired vaudeville beginnings resulting in his first self-titled album, then the solo career proper takes off (that’s where my reviews begin), the unfuckwithable 70s, the blow-wave superstar years of the early 80s, the years where it all went horribly wrong, the underrated 90s, and everything else since. I will not be de-coding Bowie’s songs for meaning or messages, more a look at the quality and enjoyment of each song on it’s own merits - and all in my humble opinion.

Let's begin where it all really started. 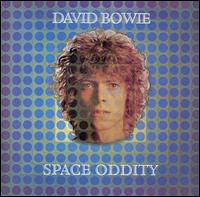 1. Space Oddity: Masterpiece #1. Bowie's first stone cold classic and still sounds great today. Scared the hell out of me as a kid and still has an element of menace associated with it. Put Bowie on the map as his first hit single, and for a time seemed to be his only hit. Was to go on and re-record a stunning Lennon-esque stripped down version in 1979. 10.0

2. Unwashed and Somewhat Slightly Dazed: “Spy spy pretty girl..”. A fine song and really rocks along in the Dylan-esque country rock and heavy rhythm style Bowie was dabbling in at the time, including his embracing of all things hippy (which may unfortunately have resulted in less showering). Also includes some ripping Benny Marshall harmonica. Ditty ‘Don’t Sit Down’ (3.5) follows. 7.5

3. Letter to Hermione: Direct love song about former love Hermione Farthingale, and can be quite affecting when listened to in a dark room, alone. Quite a moving piece, but I don’t like Bowie’s voice in this one too much. Again with the Dylan angle. 7.0

4. Cygnet Committee: The definitive Bowie dystopian rant. I think you needed to be born in the 60s to fully appreciate his sentiments on this one. He seems to be describing the ironies of the hippy movement of peace and love and how even the hippy movement was forceful and controlling. It’s heavy going Cygnet Committee but it’s a stunningly passionate vocal performance. 8.0

5. Janine: Echos of Ziggy in the intro and light bouncy pop has never sounded so good. I like the reverb on the vocal. All in all a pretty unassuming song and somewhat reminiscent of Hey Jude towards the end. 6.5

6. An Occasional Dream: Another gentle love song about Hermione Farthingale again but not as effective as ‘Letter to…’. Time gently washes and erodes the past until the once heavily-passionate affair becomes the subconscious musing of an occasional dream. This piece was an early attempt by Bowie to convey, in direct terms, the effect that rejection in love had upon him. His later work becomes surreal and obscure so I am grateful that we are permitted to share his personal feelings towards a fellow human being in such an unadulterated manner. 6.5

7. Wild Eyed Boy From Freecloud: A personal favourite and while there have been any number of versions recorded, this remains the best (except perhaps for the live medley version on ‘..the Motion Picture’ which is worth the price of admission alone). 8.0

8. God Knows I’m Good: Probably based on a story Bowie read in the newspaper. Using religion when it suits you, in this case an old lady. Not the strongest moment on the album, probably the weakest. 6.0

9. Memory of a Free Festival: Someone thought this would make a good single (although the single version, Part 1 and Part 2 is superior to what is here). That’s how much bliss was being passed among the crowd at the Arts Lab Beckingham Free Festival in 1969. With its Hey Jude-esque singalong outro, this track was last seen opening the Philly Dogs tours in 1974. 7.5

VERDICT: Within the individual songs there is not a truly weak moment, and such an unfocussed album it’s still strangely impressive as a whole. Would’ve been even stronger had some additional tracks recorded around the same time been included eg: Let Me Sleep Beside You (6.5), London Bye Ta Ta (6.0), Conversation Piece (7.5) or The Prettiest Star (6.5). A rag-bag collection of psychedelic folk rock from an artist still finding his true voice. Still prefer the 1972 “Ziggy” re-release album cover (and new title) rather than the 1969 perm and horrendous (Man of Words, Man of Music) title.

NEXT: Heavy Metal!
Posted by Pierce Brown at 4:48 PM